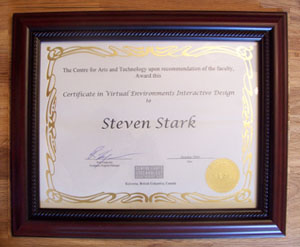 In 2000 I received my first job as a Junior Web Developer, and within the first year I was managing a small web development team after running the company solo for 6 months. By 2002, I attended the Centre of Digital Arts and Technology where I completed the 3 “year” X-Media certification ( no longer offered as one course ). My certification included training in Print, Web, Video, Sound, 3-D, Law, Marketing, Art and Programming. After college I worked for another design company that dealt primarily with Car Dealers. I produced over 20 high end websites in just under 6 months, including Novlan Brothers. I then moved to Vancouver and worked in Affiliate Management for a large On-line Sports company.

After a short time in Vancouver, I became independent and have been successfully contracting out my services while working from my home office. It wasn’t long until I decided to start up some websites of my own, and I started attracting some large clients. One such client was Interactive Card Solutions, who were making a free pc cd-rom when any customer purchased Sony’s ‘DaVinci Code‘ DVD at Circuit City. The art director on the project came to me, and had me do all the programming and development in Flash. This was such a large project for me at the time, and is still one of my favourite portfolio item. I also took on some rather large group projects including early stage prototyping and development for various projects, including Camp Skookum, which would involve teams from 2 to 8 people at a time, all managed through myself.

I also became a new teacher at the Institute for Advanced Media teaching 3rd year courses ( XML, Flash, UML, WML, Joomla, WordPress, HTML, MySQL, JS ), which was quite an enjoyable experience for me which taught me a lot.

I then continued my career working with Bardel Entertainment in their new interactive department and Blitzoo Social Games, both as a front end lead in their game productions developing casino games in Flash for Facebook and mobile devices. I am now building more casino games for Badda Media, but this time around I am porting Flash games to HTML5.

It is also worth mentioning that I have Charcot Marie Tooth disease, a hereditary motor and sensory neuropathy with muscular atrophy. My career choice is perfect for this because all the typing assists with keeping my hands active, and being able to do contract work from home helps when having a rough day. I am grateful to be adept at a career choice that fits so well in my life. Read more about how I approached my career planning with CMT.